This article is outdated. You can help Robocraft Wiki by updating it. 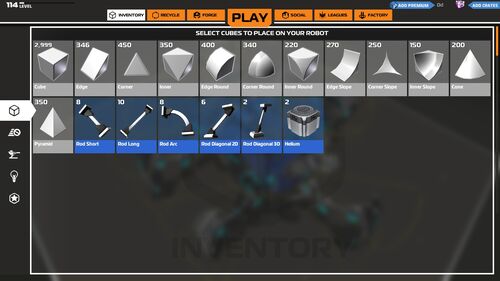 The inventory is divided into five categories/tabs: Chassis cubes, Movement cubes, Hardware cubes, Special cubes and Cosmetic cubes. These categories are seen in the mid-left of the inventory.

Items in your inventory are also colour coded by rarity:

An example of different kinds of chassis shapes.

These are literally the building blocks of your bot. They take damage, and generally make your bot function by connecting vital components together, as well as protecting them from fire.

The mechanics of damage transfer as well as the shape of chassis' also gave birth to Triforcing, the act of transferring damage away from vital components by means of building with Prisms and Tetras, however due to recent updates this method os not effective anymore.

Wheels, one of many ways for transportation.

These are compoents used to make your bot functionally move from one place to another. Examples include Wheels, Caterpillar Tracks, Hoverblades,Aerofoil,Rudder, Walker legs, Skis and Rotor Blades.

Like chassis cubes, there are also 5 tiers of movement parts to be found, each being better and bigger, in terms of armor, max speed and size.

You can have as many types of movement on your bot as your CPU dictates.

These parts fall under being vital components, in which the chassis' objective is to protect.

Hardware components are used for either offensive or defensive purposes:

Smgs, an example of offensive hardware.

These are hardware designed to damage the opposition in many ways. Examples include SMG's, Plasma Launchers, Rail Cannons, Nano-Disruptors, and Tesla Blades.

Each weapon functions differently to the others, making for a more interesting gameplay.

SMGs are a kind of laser rifle, they shoot small beams that do damage to enemies. Each SMG will fire separately, and will shoot in a pattern one after another, from bottom to top, left to right. SMGs have no recharge period.

SMGs are good for getting kills, as they are very effective against enemy robotsbanduvy good at destroying Protonium Crystals.

Electroplates are good for protecting against SMG hits, it will take an SMG robot a few shots to shoot through the Electroplate.

Plasma launchers shoot bomb-like shots, that do splash damage to anything within a short radius tha con go trough thin walls and electroplates.

Plasma launchers aren't as good at getting kills as the SMG, but is the second most effective weapons for destroying Protonium Crystals.

Electroplates aren't as good at shielding from plasma volleys, the plasma will, in most cases, deactivate the Electroplate in one hit, and destroy it on the next shot.

Rail cannons shoot very precise, concentrated beams. These beams can damage and penetrate through armor from a great distance; you can even one-shot an enemy robot from across the map. Rail cannons have a long recharge time.

Rail cannons are good at getting kills because of this feature, but aren't as good at destroying Protonium Crystals due to the fact that the beam damage is in a very small, concentrated area.

In most cases, Electroplates will be shot off in one hit by a rail cannon.

Tesla Blades are Robocrafts only melee weapon. To hit an enemy robot with a Tesla blade, ram it with the respective side of your robot. Tesla blades create a small explosion when they hit a robot, but this explosion will not hurt you or any other players. Tesla blades are considered a secondary weapon, so they can be paired with any other weapon.

Teslas are average at killing enemies and are bad at detroying Protonium Crystals.

Electroplates will, in most cases, be destroyed in one hit from a Tesla blade.

An electroplate, an example of defensive hardware.

Currently, only the Electroplates are known to be used for defensive measures.

They take up higher CPU as compared to chassis cubes, and for good reason:

Unlike chassis cubes, these plates "absorb" a significant amount of damage before being disabled and eventually destroyed. If a certain time a disabled plate does not take damage, the plate will regenerate its absorbing capabilities. Destroyed plates will not come back, however, unless a Medic repairs it back.

A radar used to detect enemies.

These components are used in many different ways: The Radar detects enemies, the Radar Jammer temporarily prevents detection by radar, the Radar Receiver takes information from nearby allies of enemies sighted, Headlamps are used to see in the dark(there aren't much dark places tho), and the modules also fall in this category.

A robot name banner that shows the craft's name.

The Cosmetics tab contains everything fun and useless. All blocks in this category serve no purpose but to entertain. This tabs includes Holoflags, Vapor Trails and Robot Name Banners.